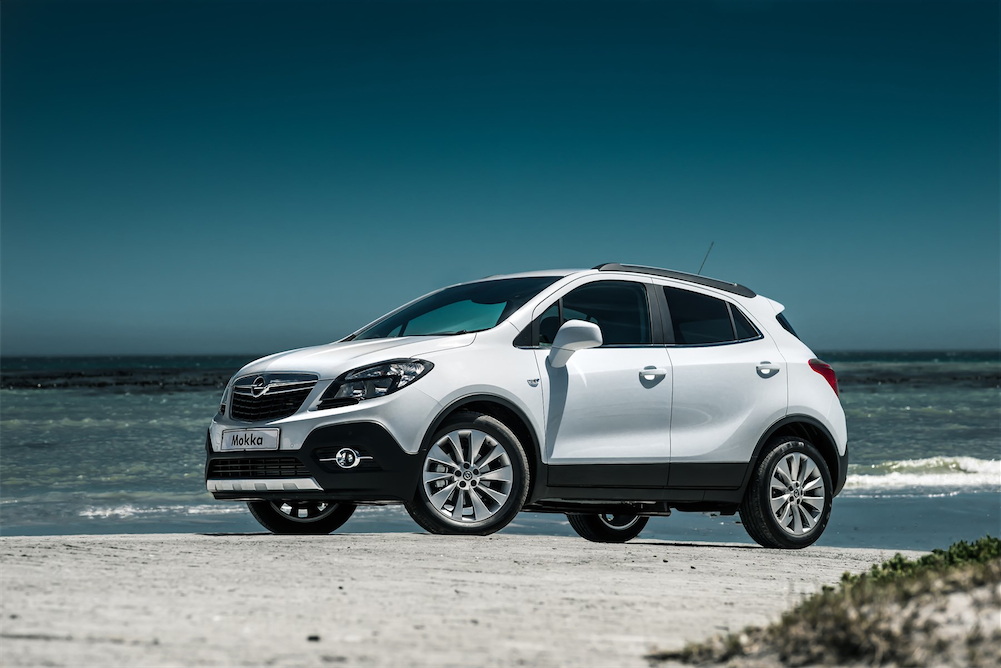 From Wikipedia, the free encyclopedia Jump to navigationJump to search

The Opel Mokka is a Crossover SUV engineered and built by German automotive marque Opel since 2012. Sales began with model year 2013 in late 2012.[4] The Mokka is now built in Bupyeong, South Korea and Zaragoza, Spain. In 2016 The Opel Mokka was renamed to the Mokka X. It is also sold under the Vauxhall brand in Great Britain, and as the Buick Encore in North America and in China. A variant of the Mokka/Encore vehicle having significantly different sheet metal and trim is marketed in North America as the Chevrolet Trax.[3]

In September 2007, What Car? produced computer generated images, which showed a Corsa C based SUV. However that model never made it into production.

The Mokka is positioned below the Antara and the Zafira Tourer in the Opel lineup, and is available in both front wheel and four wheel drive versions. The Mokka name derives from the small, round coffee beans of the Coffea Arabica variety.

The four wheel drive option is an intelligent AWD system that maintains 100% drive at the front wheels until the system detects slip, fast starts or tight cornering, in which case it can send up to 50% of torque to the rear wheels.[7]

In the Russian market, a version with a 1.8 litre A18XER (Korean designation F18DA) petrol engine is available. The cars for the Russian market were assembled by Avtotor (Kaliningrad, Russia) and later by Unison (Minsk, Belarus) in 2015.[9]

In April 2016, Opel and Vauxhall unveiled an updated version of the Mokka for model year 2017, designated as the Mokka X, which went on sale in late 2016. The new Mokka X sports a facelift with sleeker headlights, restyled bumpers, new LED tail lights, and a revised interior with an all new dash, instrument cluster, and center stack. The more powerful optional 150 hp petrol engine was also introduced with the Mokka X.[13][14]

The North American version of the Opel Mokka debuted as the 2013 Buick Encore at the 2012 North American International Auto Show[15] in Detroit on January 10, 2012 and went on sale in early 2013. The Encore, Buick's first small crossover SUV, its fourth SUV overall after the 2002 Rendezvous, 2004 Rainier, and 2008 Enclave, is available in front wheel drive (FWD) and all wheel drive (AWD) versions.[16]

The Ecotec direct injection engine package includes Stop/Start technology to improve fuel economy and was made available as an option on all but the base model for 2017 and 2018.[17] In 2017 the model levels became Base, Preferred, Sport Touring, Preferred II, Essence, and Premium.

For 2017, the Buick Encore received revised headlights and bumpers, LED tail lights, and the interior received a revised dash and gauge cluster with a 4.2 inch information screen, a revised center stack, and infotainment system with an 8 inch frameless screen. The faux fender ports, marketed as VentiPorts on 2013-2016 models, were deleted.[18][19]

2013 through 2018 owner's manuals for the Buick Encore state that the vehicle is not designed for trailer towing.[20] However, the 2013 through 2018 owner's manuals for the Opel counterpart of the Buick Encore, the Opel Mokka, do provide information for trailer towing.[21] And, the 2018 Opel Mokka X brochure includes a data table indicating allowable trailer weights for Mokka X vehicles having various FWD and AWD powertrain configurations including the 1.4 litre engines coupled with automatic transmission.[22] An aftermarket class II 1-1/4" receiver style hitch rated for 3500 lbs. maximum gross trailer weight is available for the Buick Encore.

Sales in the U.S.

Bitter has been producing a luxury version of the Mokka since 2016. Facelifted in late 2016 along with the Vauxhall and Opel models, the name was also changed to Mokka X.[29] The differences between the Bitter and Opel versions are mainly cosmetic.[30]